Soprano Anna Netrebko, whom the New York Times hailed as “magnificent” when she made her role debut as Tosca in 2018, returns to cinemas on April 11 as Puccini’s explosive diva. Tenor Brian Jagde...

This opulent triptych was inspired by Balanchine’s visit to the famous jeweler Van Cleef & Arpels on New York’s Fifth Avenue, celebrating the cities and dance schools of Paris, New York and...

Richard the Lionheart is dead. His brother John is King of England. Threatened from all sides by Europe, the English noblemen and even his own family, King John will stop at nothing to keep hold...

Due to the Coronavirus pandemic, we have reluctantly decided to postpone this production. By Charles Dickens Adapted by Neil Bartlett Following on from their successful production of 'The...

In PETER RABBIT™ 2, the lovable rogue is back. Bea, Thomas, and the rabbits have created a makeshift family, but despite his best efforts, Peter can’t seem to shake his mischievous reputation....

We have taken the decision to close The Fullarton to the public and cancel all performances with immediate effect. We will be contacting ticket bookers.

In the first instance the closure will be until 30 April during which time we will continue to monitor the situation with a view to re-open as soon as it is safe and responsible to do so.
This is the first time we have had to take such action since we opened in November 1996 and is not a decision that was taken lightly.

We hope you understand and look forward to welcoming you back when normality is restored.

We are holding a number of refunds due for cancelled shows.  If you paid at The Fullarton by cash or card, please e-mail jim@thefullarton.co.uk or leave a message on our answering machine 01556 504506.  Refunds will be paid as soon as possible after the present restrictions are eased.

For customers who booked on line, refunds for March and April shows have already been paid by Ticketsource.

As a charity, The Fullarton is always grateful to receive donations, so if you wish to donate all or part of your refund to us, please let us know.

Cinema - Release Date Changes
The dates listed are UK Release Dates. As an Independent Cinema, films are normally made available to us around 4 to 5 weeks after release.

We have no word as yet of plans to move Trolls World Tour (currently slated for 10 April) but will of course let you know if we do.

Soprano Anna Netrebko, whom the New York Times hailed as “magnificent” when she made her role debut as Tosca in 2018, returns to cinemas on April 11 as Puccini’s explosive diva. Tenor Brian Jagde is the idealistic painter Cavaradossi, and baritone Michael Volle completes the opera’s fatal love triangle as the sinister Scarpia. Bertrand de Billy conducts Sir David McVicar’s stunning production.

This opulent triptych was inspired by Balanchine’s visit to the famous jeweler Van Cleef & Arpels on New York’s Fifth Avenue, celebrating the cities and dance schools of Paris, New York and St. Petersburg, each bound to its own precious stone: emerald, ruby and diamond.

Balanchine built an homage of captivating beauty to the three dance schools that had forged his style, each represented by a contrasting gemstone. JEWELS offers a unique occasion to enjoy the genius of choreographer’s visually captivating work performed by some of the world’s most dazzling dancers.

Pietro Mascagni’s Cavalleria Rusticana (Rustic Chivalry) and Ruggero Leoncavallo’s Pagliacci (The Players) are today Italian opera’s most famous double act, but they were written independently. Cavalleria Rusticana came first, its hugely successful premiere in 1890 doubtless an influence on Leoncavallo. His Pagliacci in 1892 was another triumph. The two works, each undeniable masterpieces of the verismo tradition of realism, share dramatic concision, melodic richness and an obsession with violent jealousy.

Richard the Lionheart is dead. His brother John is King of England. Threatened from all sides by Europe, the English noblemen and even his own family, King John will stop at nothing to keep hold of his crown.

Due to the Coronavirus pandemic, we have reluctantly decided to postpone this production.

Following on from their successful production of 'The Railway Children' in 2019, The Fullarton Theatre Company are back with another literary adaptation - 'Oliver Twist'.

Neil Bartlett’s powerful version of Oliver Twist brings the dark underbelly of nineteenth-century London back to bold theatrical life. The unforgettable characters – Fagin, Nancy, Bill Sikes, and the Artful Dodger – inhabit a world filled with images of danger and fear, innocence and hope; a world seen through the eyes of an astonished child. This version was first performed at the Lyric Hammersmith in 2004.

Please note: This is a play - not the musical 'Oliver'.

The Red Shoes is a tale of obsession, possession and one girl’s dream to be the greatest dancer in the world. Victoria Page lives to dance but her ambitions become a battleground between the two men who inspire her passion.

Set to the achingly romantic music of golden-age Hollywood composer Bernard Herrmann, The Red Shoes is orchestrated by Terry Davies, with cinematic designs by Lez Brotherston, lighting by Paule Constable, sound by Paul Groothuis and projection design by Duncan McLean.

Matthew Bourne’s The Red Shoes was filmed live at Sadler’s Wells in London and is the seventh New Adventures production to be filmed in partnership with More2Screen and distributed to cinemas worldwide. It was directed for the screen by Ross MacGibbon and produced by Illuminations.

a new play by Lucy Kirkwood

One life in the hands of 12 women.

Rural Suffolk in England, 1759. As the country waits for Halley’s comet, a young woman is sentenced to hang for a heinous murder.
When she claims to be pregnant, a jury of 12 matrons are taken from their housework to decide whether she’s telling the truth, or simply trying to escape the noose. With only midwife Lizzy Luke prepared to defend the girl, and a mob baying for blood outside, the matrons wrestle with their new authority, and the devil in their midst.
James Macdonald (Who's Afraid of Virginia Woolf?) directs Maxine Peake (The Theory of Everything, Funny Cow) and Ria Zmitrowicz (Three Girls, Mr. Selfridge) in this bold and gripping thriller from Tony Award-nominated writer Lucy Kirkwood (Chimerica, Skins). Broadcast live from the National Theatre in London.

The Royal Ballet: The Dante Project (12A)

The Royal Ballet: The Dante Project (12A)

Dante’s Divine Comedy is an epic journey through the afterlife: it encompasses the horrifying drama of Inferno and its damned, the lyrical mysticism of pilgrims on mount Purgatorio and the dazzling spheres of Paradiso with their endless configurations of light. The poem was inspired by the agony of Dante’s own exile, and traces his path from crisis to revelation guided by his literary hero Virgil and his lost love Beatrice. In his new work, The Royal Ballet’s trailblazing Resident Choreographer Wayne McGregor creates a world premiere in collaboration with an award-winning team – contemporary conductor-composer Thomas Adès, artist Tacita Dean, lighting designer Lucy Carter and dramaturg Uzma Hameed – to bring us closer to Dante and his extraordinary vision.

The Royal Opera: Elektra (12A)

The Royal Opera: Elektra (12A)

Strauss’s thrilling and audacious adaptation of Greek tragedy receives a new staging by the award-winning Christof Loy. This uncompromising opera, about a daughter intent on bloody revenge and a mother driven to madness, has provoked critics to lively debate and both shocked and excited audiences since its 1909 premiere. Antonio Pappano conducts music that combines violence with moments of exquisite tenderness in his first Strauss interpretation for The Royal Opera since 2002. The outstanding cast includes Nina Stemme (Brünnhilde in last Season’s Der Ring des Nibelungen) in the title role, and Karita Mattila in her role debut as the haunted queen Klytämnestra.

Filmed live in front of an audience

A new play by Tom Stoppard
Directed by Patrick Marber

At the beginning of the 20th century, Leopoldstadt was the old, crowded Jewish quarter of Vienna, Austria. But Hermann Merz, a factory owner and baptised Jew now married to Catholic Gretl, has moved up in the world.
We follow his family’s story across half a century, passing through the convulsions of war, revolution, impoverishment, annexation by Nazi Germany and the Holocaust. A company of 40 actors represent each generation of the family in this epic, but intimate play.

Filmed live on stage in London’s West End, ‘Tom Stoppard’s masterpiece is magnificent’ (Independent) and should not be missed.

From the writer of One Man, Two Guvnors comes a hilarious new play, set in 1940s British summertime.

After an aerial dog fight, Pilot Officer Jack Absolute flies home to rejoin his fearless young Hurricane squadron at RAF Fontwell. Once back on British soil, Jack is shocked to find his old flame, Lydia, on the base. He sets his sights on winning her heart, but with turbulence and hilarity never far away, his advances quickly turn to anarchy.

Thea Sharrock (Me Before You) directs a cast including Caroline Quentin and Richard Fleeshman in this joyous farce.

‘The funniest show on the planet.’ Daily Mail on One Man, Two Guvnors

Music has the magical power to heal and to bring people together like no other art form. Following his very successful 70th birthday concert in cinemas, André Rieu invites you and your loved ones to a spectacular evening of music from his hometown Maastricht. Happy Together will be the feel-good music cinema event of the year!You are never alone when you have André in your life. No-one can pull at your heartstrings, move you to tears and make you laugh quite like the King of Waltz! Revel in the enchanting sound of André Rieu’s violin, along with his incomparable Johann Strauss Orchestra, world-class sopranos and the Platin Tenors. Get ready for a magnificent open-air concert featuring popular classics, show-tunes and of course, waltzes that carry you away.This unique cinema experience also brings you surprise special guests, backstage access and an exclusive interview with the maestro himself. So be our guest for this musical celebration making new friends in cinemas as you sing along, sway and waltz in the aisles...see you there!

Michael Ball and Alfie Boe: Back Together (PG)

Michael Ball and Alfie Boe: Back Together (PG)

The ultimate musical duo, Michael Ball and Alfie Boe are ‘Back Together’ and set to delight cinema audiences up and down the country with the final show of their UK tour at the O2 Arena. Hot on the heels of their star turns in the West End’s phenomenally successful staged concert of Les Misérables, Ball and Boe’s sensational voices and irresistible chemistry will undoubtedly light up the big screen

The Fullarton (formerly Lochside) Theatre is a professionally equipped theatre in the heart of south-west Scotland, managed and staffed entirely by part-time volunteers.

With the current refurbishment programme being the first major project carried out at the theatre during the 17 years of operation, various sources of possible funding were identified to cover the majority of the costs. Applications were made and funding arrangements were agreed from a number of sources. The theatre was pleased to receive funding from the following sources and would like to express grateful thanks to the various bodies, without whose generosity the theatre refurbishment would not have proceeded. 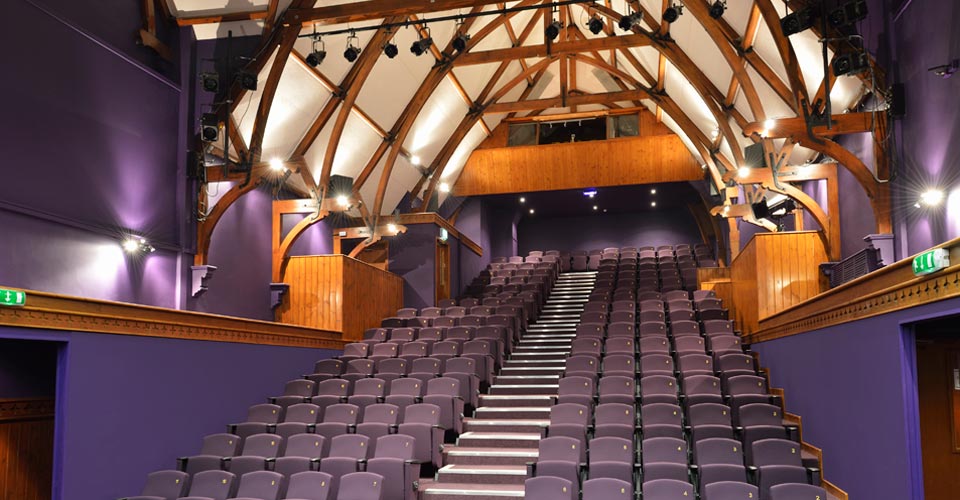 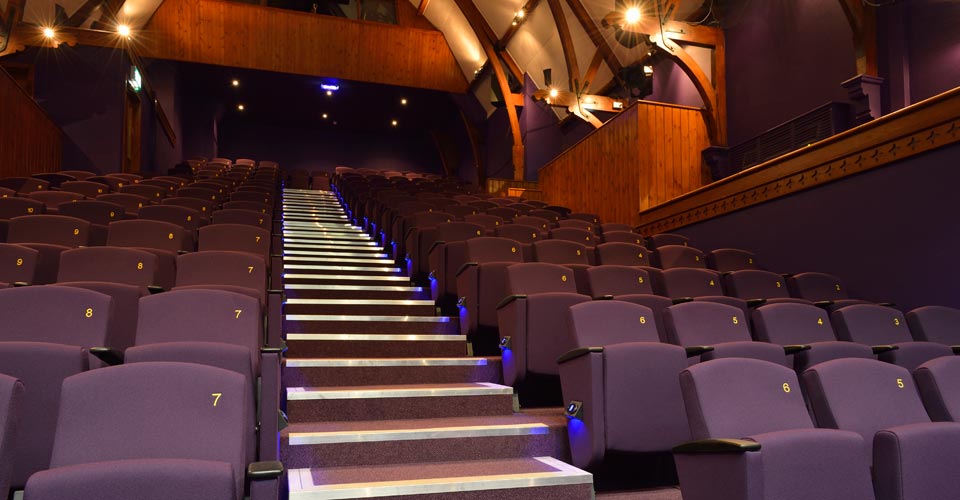 The Auditorium - before the refurbishment (June 2012) 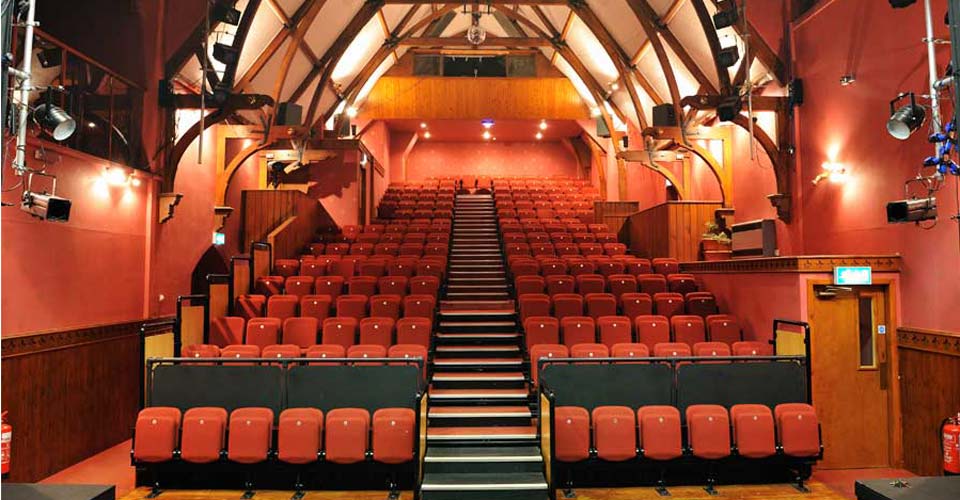 © Copyright 2004-2020 - The Fullarton
Film images and other content remain
© of the respective distributor,
promoter or artist.